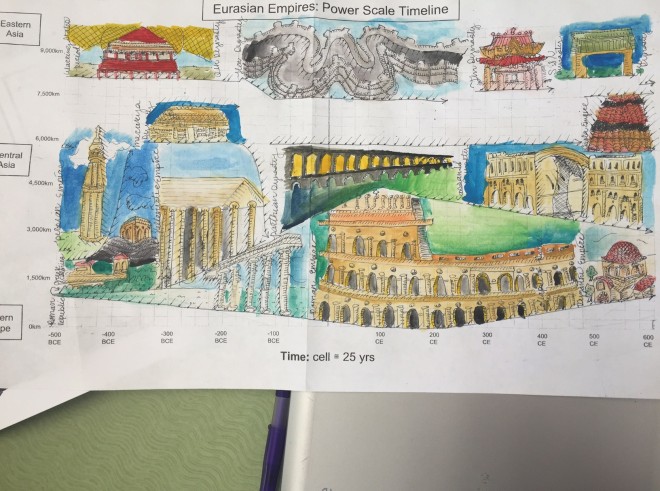 This post has taken me a while to write with several revisions because I just haven’t known how to write it in a way that gives justice to everything I have loved about this assessment. Every time I sit down to write it, a new way to introduce the post races through my head. However, I think the best way to start out is simply thanking the AP World History teachers who had the vision and the enthusiasm for working with me to create this complex, unique, and highly successful interdisciplinary assessment. So, thank you, Mr. Freeman and Mr. Sprott! I hope this leads to many more mathistory and mathenglishistry (math-English-history-chemistry) ideas!

So, here’s how the project unfolded…

Last Tuesday, the World History teacher presented our students with the idea of a power scale timeline and explained how to create one. Each group of four students were given 16+ maps of various European empires that showed the time at which each empire owned land. After identifying the region, they transferred the area onto a larger scaled timeline. Then, when all the empires were on one map, students used their mathematical knowledge to identify key points and explain why they are important relevant to time and land area (we presented this part on the second day). At this point you may be thinking whhhat theee hecckkk is this lady talking about…don’t worry, our students were also a bit perplexed by the task at the beginning and in first period, we did have a brief time when we felt as if our students might revolt against us. However, after encouraging our students to just try it out, much to their surprise with a little patient problem solving (as referenced by Dan Meyer) they excelled at the task. After they got the hang of it, I asked one student to explain the process and here is his recording. I liked getting to be in the history classroom this day because I was a second person who could help facilitate and answer questions as students created their timelines. They also started to make the connection with me being in the room that this might have some math involved in it.

On the second day, as the students were finishing their timelines, we presented them with the math portion. As they identified key points historically, we heard them using mathematical language and vocabulary terms as they talked about undecagons, parallel slopes, parabolas, intersecting lines, exponential growth, etc. It was really cool to see students make connections and hypothesize using their knowledge from both classes. We encouraged students to work together because the questions we gave them ranged in topics from both Algebra II and geometry. Each group had students from both classes and therefore they were able to be experts in the subject they were taking. Walking around helping students work through the assignment, I overheard two students talking about interdisciplinary learning and caught the end of their conversation on tape. Hearing them voice their appreciation for interdisciplinary learning really made it all worth it!

Yesterday I finished grading the math portion of the timelines and was sitting with the English teacher during our monthly Saturday school when she asked me, “so, would you do it again?” My immediate answer was, “YES!!” I think that asking students to use mathematical evidence in their explanations of what was happening historically made them think deeper. I also think they were able to synthesize better by using logical mathematical thinking. Additionally the featured image at the top of this post is one that we were very impressed by. She spent time finding key images and icons from each empire and finished her timeline with detailed watercolors. It made us think of the possibilities…perhaps students could design a timeline based on different aspects of each empire (religion, architecture, art, etc.) I think there is so much more we can do and definitely lots to think about. Over the next few weeks students will continue to learn in their World History classes about each empire and add to their timelines in order to create a large final timeline in groups…so more to come!!

Here is the link to the math student materials: MatHistory